Home /
Tutorials /
USENET Part 1: Wasn’t USENET Part of AOL or Something Back in the Dial-Up Days?

USENET Part 1: Wasn’t USENET Part of AOL or Something Back in the Dial-Up Days? 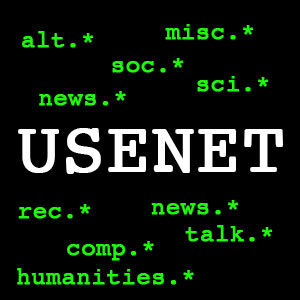 In this article we begin a series on USENET, a “worldwide distributed discussion system available on computers,” as Wikipedia puts it.  USENET was begun in 1980 and has changed dramatically over its lifetime.  We’ll explain what USENET is and how you can use it.  We’ll also talk with Frugal Usenet, one of our community advertisers.  If you’ve never known much about USENET, you’re in for an education about a fascinating technology that still underlies hundreds of TBs a day of traffic.

Are you interested in having a discussion with people from around the world centered on a specific topic?  What platform would you use in, say, 1980?  Certainly not Discord or a vBulletin forum.  In fact, the web doesn’t even exist yet.  TCP/IP itself is only a few years old.

My friend, you would use USENET.  USENET is a news service, though for “news” don’t think “as put out by a journalist” but rather “posts from users”.  USENET runs on the NNTP protocol, and it’s probably easier if I just describe the experience.

Individual sites or organizations (or really anyone) run on anews server.  They decide which newsgroups (or just “groups”) to carry, and the groups are outlined in various hierarchies with top-level names like “comp” (computer-related), “rec” (recreation), “soc” (society/social), etc.  For example, there is a group devoted to the C programming language is comp.lang.c.

The news server is set to a given retention and posts expire.  So if you login in June and your site has a 60-day retention on its news server, you’ll see things back to April but not earlier.  Retentions are configurable down to the group level.

When you post something, it’s similar to the old FIDOnet or bulletin board days.  What you post is shared with others who subscribe to whatever group you’re posting to.  This is by no means instant!  In the 1980s-1990s, some hosts would only exchange news once a day.  Of course, modern USENET servers exchange very quickly.

Note that the medium is text.  While binaries are exchanged, they’re uuencoded – similar to how you’d mail someone a file.  In fact, people share code using .shar files, which were text files that were valid shell scripts.  You’d download, set to executable, execute, and it would create and populate all the files of its archive.  In essence, this acted like a tar file, but .shar files were easy to post on newsgroups or in email.

Yes, I know – I wouldn’t grab a random multi-thousand-line shell script from a random stranger and execute it, but it was a simpler time.

USENET at Its Peak

I was a heavy USENET user throughout the 90s, using trn or tin on a SunOS or Linux machine.  Our university carried all groups and I remember when the massive 9GB hard drives arrived, mainly due to USENET growth.

I conducted and bid on auctions in rec.games.frp.marketplace, which is again a sign of a gentler time.  People mailed checks or money orders and strangers sent books.  I voted yes or no on new newsgroups.  I asked code questions in comp.lang.c, and remember having discussions on at least a dozen other groups devoted to various interests at the time.

Everything you did was tied to your name and email, though these were not impossible to forge.  Still, I remember people posting with signatures with their email routinely and often phone numbers as well.

Things got unwieldy at times because of “cross-posts”.  Someone with too much passion or a grudge would decide they wanted everyone to hear about it and so they’d post the same message to every newsgroup.  There was team – I want to say a midwestern university but I don’t remember – that came up with some heuristics to analyze the post flow and issue cancels for people who cross-posted.  It was all very much reminiscent – or is that preminiscent? – of later email spam wars and filtering.

Some groups evolved into established communities with bodies of reference materials.  For example, many groups composed FAQs (an early use of the term online) that were then auto-posted once a month.  Some of these – such as the one from comp.lang.c – later were published as books and are invaluable resources.

Before the web existed, the main options for sharing things with the public were via anonymous FTP server or via USENET.  For most users, it was far easier to get a USENET account than to setup an FTP server (this was a pre-VPS era!) or get a directory on an existing one.  Most ISPs of the period provisioned USENET access as part of their account packages, and that allowed you to share your thoughts to a huge audience.

USENET went through two eras – and potentially three.  The first will be the subject of our next, epic post in this series, when Uncle Raindog is going to pull up a chair and tell you all about spambots, wars with Scientology, mad kooks, and other lore.  But that era eventually came to an end, for reasons and events which we will also cover.  I’d put the timestamp sometime in the mid-2000s.

The second era has been dominated by use of USENET to distribute binaries.  Although it’s a grossly inefficient platform (you have to encode to text and then decode), there are hundreds of terabytes per day of USENET traffic.  Is most of this bandwidth devoted to distributing public domain books, Linux distribution ISOs, and open source repositories?  Yes, I’m sure that must be the case.

Remember, nothing is permanent on USENET.  It’s all “in motion” all the time.  How fast can someone notice content, file a DMCA, have it acknowledged…the traffic gone long before the paperwork arrives.  That’s not to say that all of USENET’s traffic is this way.  It depends how you count it.  By megabyte?  Yes, 99.99% binaries.  By user?  There are still many communities whose home is on USENET.

So is USENET just hanging around as a weird legacy protocol for a few diehards and pirates?  Or is there a third era of USENET on the horizon?  One that goes back to its discussion roots?  That will be a topic in our series finale when we’ll be interviewing Frugal Usenet!

The post USENET Part 1: Wasn’t USENET Part of AOL or Something Back in the Dial-Up Days? appeared first on LowEndBox.

usenet usenet something
Read The Rest at
lowendbox.com

Selling my own GPL software part 3, prior art...