Home /
Tutorials /
Install 200+ Apps In Your VPS With One-Click! — Introduction To CapRover!

Install 200+ Apps In Your VPS With One-Click! — Introduction To CapRover!

Thanks to @hzhoanglee for helping with this story!

What are Caprover and Heroku?

CapRover is an easy to use app/database deployment & web server manager for your web applications. CapRover is a free and open Source code Platform as a Service (PaaS) that you can run on your own VPS.

CapRover uses Docker for its backend and NGINX as reverse proxy.

Heroku is a commercial cloud PaaS that enables developers to build, run, and operate applications entirely in the cloud.

What is the purpose of Caprover and Heroku?

CapRover and Heroku enable users to run, build, and deploy web applications easily through a web browser interface or GUI. Both allow users to focus on using apps, for example coding with code-server, instead of focusing on setting up things. Both run containers to serve web apps.

CapRover has 2 kinds of alternatives:

Installing apps With CapRover creates subdomains which did not previously exist.

Information about CapRover pre-install, installation, and one click installation at Digital Ocean can be found here: https://caprover.com/docs/get-started.html

@hzhoanglee has set up CapRover on an Oracle Cloud ARM instance and at Azure. However, many applications cannot run on ARM64 servers as Docker images of the ARM app are not available. 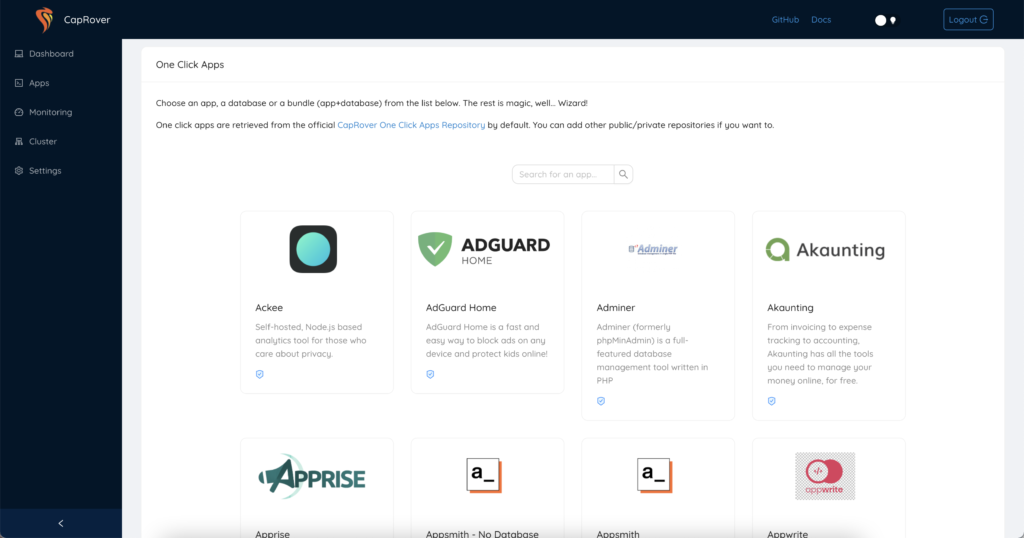 CapRover can be used to easily run different applications without much effort. For example: running many applications (WordPress, Jitsi, code-server, etc.) in a single VPS, dedicated server, or setup a cluster.

@hzhoanglee says, “I just go to One-Click App install, select Code-Server, enter password, and CapRover will do the rest for me. CapRover will automatically pull an image, deploy a Docker container, set up a subdomain, and use Nginx to forward to it. There are over 200 apps which can be deployed with One-Click.”

CapRover source code is available on GitHub, under the Apache license, Version 2.0.

The GitHub repository for CapRover has 8.4K stars and 58 open issues.

@hzhoanglee says, “CapRover is interesting because it saves a lot of time and is totally open source. CapRover can run perfectly on both x86-64 servers (Intel or AMD) or ARM64 servers (Raspberry Pi or Oracle Cloud ARM).”

The post Install 200+ Apps In Your VPS With One-Click! — Introduction To CapRover! appeared first on LowEndBox.

HTTP GET requests with Qt and in Qml (async)

Certbun, An Easier Alternative To Certbot, From Porkbun
7